Bitcoin Designed Luxury Watch Can Be Yours For $400,000 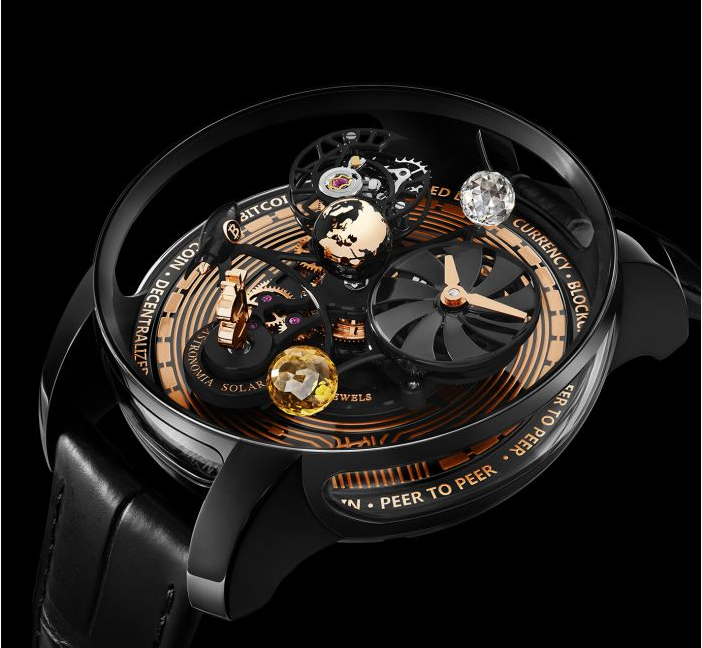 Astronomia Solar is the first-of-its-kind luxury watch by expert watchmakers, Jacob & Co. It boasts of groundbreaking engineering and designed with cryptocurrencies in mind.

The Astronomia represents the pinnacle of watchmaking at Jacob & Co in the 21st century.

If you’re over the moon with Bitcoin and other cryptocurrencies, the Astronomia Solar is intricately designed with the details interlaced with Bitcoin features which you can get for $400,000.

The Scarcity Concept of Astronomia

The Astronomia is a unique and pioneering watch concept that has only 25 pieces available. The law of scarcity is imminent similar to Bitcoin’s scarce nature.

Being a limited-edition timepiece, the Astronomia symbolizes the early beginnings of Bitcoin and how it evolved from being a theory to becoming a pivotal building block of today’s financial system.

Such concept also adds to its overall appeal to investors and traders who have the wherewithal to shell out a stupid amount of dough to satisfy their needs. 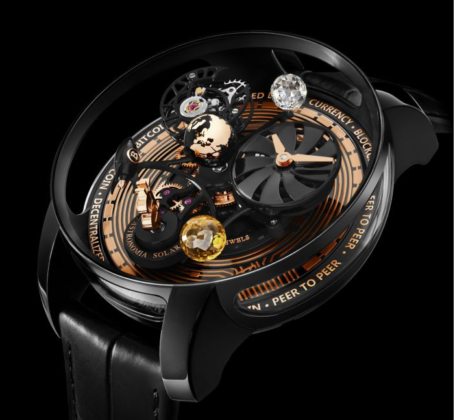 Noticeably, the 444 components and two rotating prongs of the Astronomia are eye-catching. The first platform consists of the microchip main plate which resembles that of the brain of Satoshi Nakamoto and the other is composed of its arms as well as other intricate moving parts.

The watch is able to complete a rotation for 10 minutes which is in fact the time you need to clock in when waiting for changes in Bitcoin price. The clock dial looks the same with the motherboard fan found in ASICs that mine BTC.

A Timepiece That Champions Cryptocurrencies

The hands of this black Astronomia Bitcoin watch is made of 18K rose gold.

You can’t help but gasp at the rotating Bitcoin sign which is a tribute to cryptocurrencies, specifically the Bitcoin universe that started it all.

“All these symbols tell the narrative of the advent of the first cryptocurrency, from abstraction to reality, from outlier to a mainstay of the financial system,” the company said.

Astronomia’s casing is 21-millimeters thick and 44-millimiters in diameter. The luxury timepiece also boasts of full lugs which is designed with a vertical angle providing a comfortable and convenient fit on your wrist.

More so, the Bitcoin-inspired luxury wristwatch also has a one-carat diamond moon, golden earth, and black rocketship. Imagine the amount of engineering and science put into this thing.