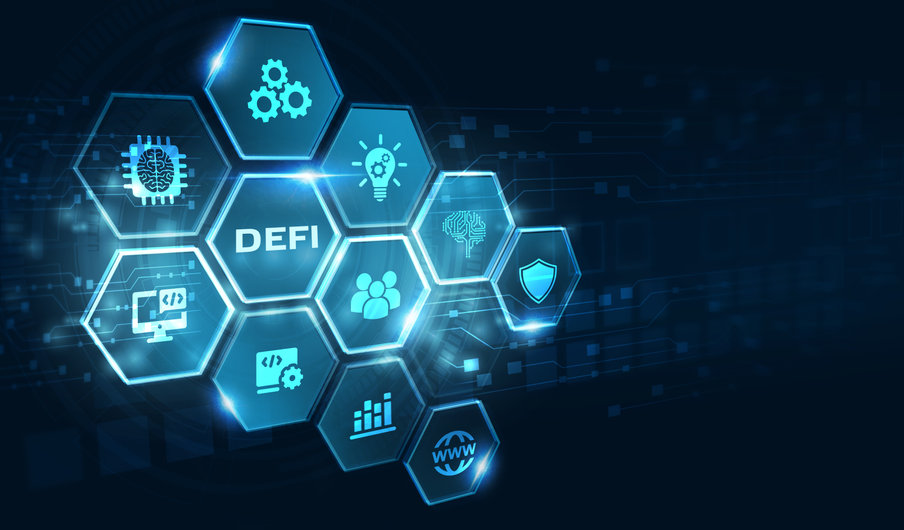 Now that the dust has settled from the spectacular Terra collapse, I thought it would be interesting to dive into the DeFi space and see how the shake-up has affected other protocols. DeFi surged to prominence in 2020, or if you want to get down with the lingo, during a period known as “DeFi Summer”.

Since then, it has cooled a little bit – yields dropped across the space as the market became a little more efficient, which makes sense. Well, there was still a pretty juicy yield available on the Anchor protocol, actually – a salivating 20% – but I heard on the grapevine that it didn’t end so well.

As the above graph from DefiLllama shows, Anchor total value locked (TVL) plummeted from $18 billion to within a rounding error of zero. If you hit “Play Timeline” in the top left corner of the graph below, you will see the TVL for the entire Terra blockchain, which until a couple of weeks ago had a comfortable hold on second, second to only Ethereum. How the mighty have fallen.

So how have the rankings shaken up? Well to answer Eminem’s question, it’s the suddenly-rather-smug looking DAI stablecoin that is back, back, back, back again. MakerDAO is King of the Hill once more, with $9.5 billion in TVL placing it as the number 1 protocol, following the curious case of Anchor’s vanishing $18 billion.

It’s a cruel but logical twist of irony, of course, as MakerDAO had launched the first decentralised stablecoin to achieve genuine prominence– DAI. While my Editor Joe KB suggested on our newly-launched CoinJournal podcast last week that Americans don’t do irony, I’m sure this wasn’t lost on anyone.

For the uninitiated, DAI shares that seductive quality of decentralisation with the befallen TerraUSD. DAI advocates will be screaming as loud as they can, however, that there is also one very important distinction – DAI is collateralised.

To give a snappy explanation, DAI is created when users borrow against locked collateral. Conversely, it is destroyed when that loan is repaid, when the user simultaneously regains access to the locked collateral.  It’s almost nauseating how much sense it makes when compared to TerraUSD, but nonetheless, it was losing significant market share to all things Terra, with founder Do Kwon not pulling any punches in his war against this logical stablecoin.

By my hand $DAI will die.

Curve and Aave are the two protocols behind MakerDAO in this new-look top three. Similarly, they also present as old-timers, perhaps “less sexy” protocols than the admittedly dazzling, if inherently flawed, Anchor protocol was. The TVL on both is similar at $8.9 billion and $8.5 billion respectively. I thought the CEO and founder of Yield App, Tim Frost, had interesting thoughts here when he said the below:

“It’s heartening to see Maker DAO, the original decentralised stablecoin project, return to the top spot in terms of total value locked (TVL) this week. According to data from Defi Llama, Maker DAO – the home of US dollar-pegged stablecoin DAI – is posting a TVL of nearly $10 billion as of Wednesday. While 30% down from where it was last month, this marks a grand achievement for one of DeFi’s oldest projects and a heartening signal for the entire industry.

He went on to say that “these top-three DeFi survivors (MakerDAO, Curve and Aave) really do represent the cream of the crop, providing a snapshot of the industry’s evolution from its earliest days in 2014 to today. It also shows how important solid development, track record, and reputation are in this industry. These projects were developed during the bear markets of 2018”

Frost is right on the money with his comments. And while overall DeFi TVL has plummeted in line with the recent market downturn, that was always going to be the case. It remains a highly experimental area in what is suddenly an aggressively risk-off market. But these three big dogs, if I can use that scientific language, do boast the closest thing to a reputable track record that one can find in the industry of DeFi, which has only been around since 2018.

There’s a parable here, really, and it’s seen time and time again across all asset classes and markets. We’ve been through a period of intoxicating expansion, where everyone and their grandmother has been able to make cash. I’m pretty sure my grandmother’s monkey even 3Xd his crypto portfolio during the bull run.

But with the money printer slowing, rates hiking and a laundry list of other bull factors that I quite simply do not have the energy to type right now, the demand has been sucked out of the economy. A natural flush of all the froth was badly needed, and we are smack bang in the middle of a correction across the space.

Flash in the pans like Anchor just become the latest tale of bubble hysteria gone wrong. If this is the dot-com bubble bursting, the established names like MakerDAO, Curve and Aave are best placed to be the Amazons and rise from the ashes,  whenever we do get back on track. Sometimes less sexy is a good thing. At least that what I tell my mirror in the morning after a late night spent staring at red candles on my computer screen.