Is Dogecoin to $0.1 a possibility after a meme-inspired rally?

Meme tokens are late comers in the latest crypto recoveries. Despite remaining subdued by the $0.7 resistance since June, Dogecoin DOGE/USD has now broken out. The cryptocurrency now trades at $0.076 after touching a high of $0.084 over the weekend. DOGE has been a beneficiary of a meme-inspired rally.

Meme tokens are mostly driven by hype and risk-on sentiment in the market. That could explain the recent rally in Dogecoin. However, Dogecoin Foundation Director Timothy Stebbing announced on August 14 the ability to build DOGE apps. He said that developer Shafil Alam’s project on Libdogecoin will create a possibility for new DOGE apps.

It is hard to tell whether Dogecoin was boosted by the slight news. Nonetheless, it remains clear that meme coins were surging over the weekend. Dogecoin’s sister meme token Shiba Inu was also a top gainer. That underline’s market’s risk-on sentiment for the two meme tokens.

Dogecoin retreats after the weekend rally 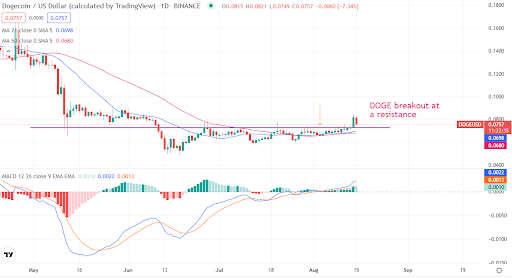 Technically, DOGE is flattening the gains of the weekend. That raises caution around the resistance-turned-support at $0.07.

Two possible scenarios are likely for DOGE in the coming days. In the bull case scenario, the token will hold the $0.07 support in place. The MACD indicator already shows a developing strong bullish momentum. The bull scenario is supported by the breakout above the resistance, now support. If the level holds, DOGE to $0.1 will become a possibility. The token could face resistance at $0.09.

In the bear scenario, DOGE will slide below $0.07. We deem this scenario less likely after the breakout. A failure of a break below makes a consolidation at the support more probable.

Dogecoin remains bullish despite relinquishing the weekend gains. The breakout could see the token to the next resistance at $0.1. The meme token could be resisted at $0.09.