Is this the beginning of the end for Poolin? Or is the mining pool just powering through some minor problems? The Beijing-based company recently announced, “Poolin Wallet is currently facing some liquidity problems due to recent increasing demands on withdrawals.” All hell broke loose after that and Poolin lost between 30 and 40% of its hashrate, but their clients might’ve been exaggerating. Then again, they might’ve not been.

Let’s read Poolin’s exact words to get to the bottom of this.

What Does Poolin’s Announcement Actually Say?

Even though the press release appears optimistic, it doesn’t inspire confidence. Poolin announced the withdrawals freeze in small font, while offering sweet deals to all miners that left their funds in their custody. A bad sign if we ever saw one. The announcement starts like this:

“Though Poolin mining pool services are not much affected, to serve the goal of stabilizing liquidity and operation, we are bringing the followings ZERO fee promotions and settlement adjustments.”

The promotions run from September 8th to December 7th, except for those with more than 1 BTC or 5 ETH in their balance. Those will have a full year of zero-fee promotions.  The trouble starts later on, though. Buried in the text, it says:

One has to wonder much is currently owed to customers? https://t.co/L677tM1lR2 pic.twitter.com/t8qivf2kW5

The mining pool is also suspending swapping and it’s encouraging its users to simply take their coins out in the same currency that they’re mining. Something innocuous that would’ve gone unnoticed if it wasn’t for everything else Poolin announced mixed with the current market conditions. 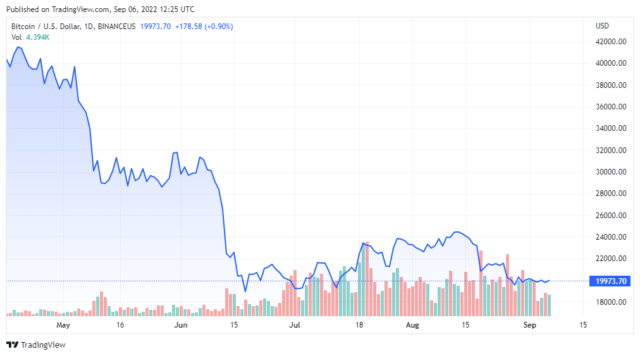 Possible Reasons For The Alleged Insolvency

The Poolin press release is vague and gives no reasons besides “some liquidity problems,” but their instructions are clear as day. “Withdrawals from Pool Account will be paused. Time and plans of resume will be released within 2 weeks,” the company wrote. And also promised that “the daily mined coins after September 6th will be normally paid out per day.”

All the way back in February 2021, Poolin was into defi yield farming. What could possibly go wrong??https://t.co/ZgvtNfdMSJ@officialpoolin
(Ht Chet)

According to analyst Dylan LeClair, there are currently “17.6k BTC currently in the known Poolin bitcoin wallet.” How could a profitable mining pool with a sizable wallet get into a situation like this? This is all speculation, but the obvious theory is that they’re China-based, and the country banned bitcoin mining a long time ago. Even though the policy hasn’t been exactly successful and Poolin moved its farms to Texas, China might have found a way to stop the pool somehow.

Another possible reason has to do with this announced change: “BTC payment method from FPPS to PPLNS” Under FPPS, miners get paid whether the pool gets a block or not. Maybe Poolin faced a stretch of bad luck, couldn’t find blocks, and that’s the reason it’s changing to PPLNS, which only pays if they do.

The third possible reason is that they had dealings with BlockFi and Three Arrows Capital. Maybe those companies’ demise ended up affecting Poolin’s business. Or maybe, as Swan’s Cory Klippsten suggests in the tweet above, experimenting with DeFi Yield Farming went horribly wrong.

According to the article Klippsten linked to, the company created “a token backed by Bitcoin mining hashrate to create DeFi yield farming incentives.” Its description sounds far too complicated and experimental:

“When acquiring Poolin’s pBTC35A token, users officially own 1TH/s of mining power on Poolin. This contract also comes with an energy usage of 35W per Terahash, at an electricity price of $0.0583/kWh. These costs are deducted from the earnings automatically, yielding users a profit of roughly 568 Satoshi per day.”

However, let’s face it, it’s far-fetched to think that a failed crypto idea would compromise the health of what used to be the fourth biggest pool in the world. We could be wrong or not seeing something, though.

What or who do you think is behind Poolin’s admitted lack of liquidity?