Post-Merge Question From The SEC: Is ETH Under Proof-Of-Stake A Security?


We’re in a post-merge world. And the SEC is looking at Ethereum once again after the substantial changes it recently went through. Word on the street is that Chairman Gary Gensler, speaking post-merge for the first time, insinuated Ethereum could now be a security. What did Gensler exactly say? What is a security? Is the SEC onto something by targeting the post-merge Ethereum?

On the one hand, Ethereum’s mining could’ve been the element that kept the organization out of the unregistered security category. Post-merge, there’s no mining and there’s still the issue of the huge premine at Ethereum’s beginning. On the other hand, we could say that the miner’s replacements, the validators, are not getting dividends. The reward is compensation for their work. Under that lens, staking wouldn’t be an investment of any kind.

Years ago, the SEC said that Ethereum is a commodity and not a security. The changes were substantial, however. ETH is a whole different animal post-merge. Does theSecurities and Exchange Commission’s Chairman Gary Gensler sees it as a target? Or are people reading too much into his words?

What Did Chairman Gensler Say About A Post-Merge Ethereum

Nothing, actually. His statements were about cryptocurrencies in general. However, after a congressional hearing, Gensler told reporters:

“From the coin’s perspective…that’s another indicia that under the Howey test, the investing public is anticipating profits based on the efforts of others.”

What is the Howey test, though? According to Investopedia, the Howey test refers to “four criteria to determine whether an investment contract exists.” The Supreme Court established them by ruling in “SEC v. W.J. Howey Co.” in 1946. The criteria are:

So, that’s what Chairman Gensler is referring to in his post-congressional hearing soundbite. Was he talking about Ethereum specifically? Is the post-merge Ethereum a security? According to Gabor Gurbacs, Strategy Advisor at VanEck among other things, it’s not about that. Even if it’s not a security, Ethereum was bound to attract regulatory attention post-merge.

To be clear, I am not saying that ETH is necessarily a security because of its proof model, but regulators do talk about staking in the context of dividends which if one feature of what securities laws call a “common enterprise”. There are other factors in the Howey test too.

And Ethereum might very well be a security, according to Gurbacs:

“I am not saying that ETH is necessarily a security because of its proof model, but regulators do talk about staking in the context of dividends which if one feature of what securities laws call a “common enterprise”. There are other factors in the Howey test too.” 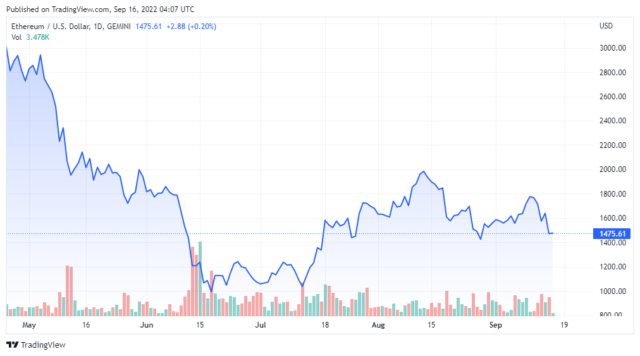 Is Staking Similar To… Lending?

The WSJ contextualized a tiny but very telling phrase by Chairman Gensler:

“If an intermediary such as a crypto exchange offers staking services to its customers, Mr. Gensler said, it “looks very similar—with some changes of labeling—to lending.”

Does it, though? It seems like a stretch at first hearing, but… the staker lends its ETH to the exchange and gets dividends in return? Maybe there’s a case to be made against the post-merge Ethereum. That’s not what professor, investor, and marketing/strategy executive Adam Cochran thinks, though. “At first brush, the idea of “buy token, stake token, earn token” can look like a security – I get that,” he concludes after a compelling and elaborate thread.

“But, with a nuanced understanding of the operation of a proof-of-stake chain, I think it fails to be a security even in a generous reading of the Howey test.

If the SEC were to argue that Ethereum is a security, I personally don’t see that view being made *more* likely by the switch to proof of stake, and I certainly don’t think anyone has grounds to state it as such definitively.”

If the SEC were to argue that Ethereum is a security, I personally don’t see that view being made *more* likely by the switch to proof of stake, and I certainly don’t think anyone has grounds to state it as such definitively.

To add to the pile, Gurbacs, who made an argument for the Ethereum-is-a-security case, had this to say as a conclusion:

“I believe that computer programs that are not used to raise money or promise dividends should not be categorized as a security. Tokens and small businesses need a lighter and cheaper regulatory regime so that they can register. The current system is complex & cost prohibitive.”

Is that the way forward? Or is the post-merge Ethereum a security period?

Flashbots Wants To Raise $50 Million, But Investors Must Pitch