Saylor’s Side Of The Story: MSTR Outperformed Every Asset Class & Tech Stock

Is Michael Saylor’s side of the story the reality of the situation? Or is he on a damage control tour? The ex-MicroStrategy CEO spent the whole day as a guest in what seems like every US financial show in existence, letting everyone know that this whole thing was his idea. Saylor picked his successor for the CEO seat and declared himself Executive Chairman, to focus on the company’s bitcoin strategy. As it usually happens, mainstream media framed it differently.

Since bitcoin’s price is still down in comparison with the highs of yesteryear, mainstream media doesn’t miss an opportunity to dunk on the asset class. This time was no exception, since MicroStrategy average bitcoin purchase stands at around $30K, and bitcoin’s current price is around $24K, most mainstream sources reported that the company had somehow lost $1B and that was the reason behind Saylor’s outing.

Even Bitcoinist joined in on the party. Besides the bitcoin side of things, we said:

“According to a Bloomberg article citing data from financial analytics firm S3 Partners, a record 51 percent of the company’s outstanding shares are being sold short at a notional value of $1.35 billion.

Since the Saylor news hit the Internet, MSTR stocks are up by around $40. And that’s not even the juicy part of MicroStrategy’s bitcoin story. 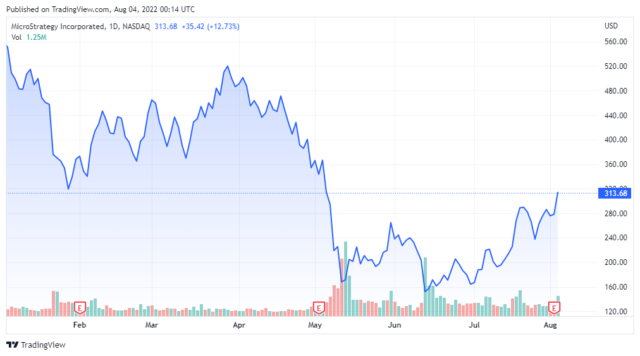 The ex-CEO started the day tweeting, “In my next job, I intend to focus more on Bitcoin.” A humorous one-liner that contains much truth. But the day and Saylor’s tour was just getting started. His first stop was on CNBC’s Squawk on The Street, and on the tweet promoting his performance Saylor wrote, “Since adopting a Bitcoin Strategy, $MSTR has outperformed every asset class & big tech stock. With my ascension to Executive Chairman, the promotion of Phong Le to CEO & arrival of CFO Andrew Kang, our team is stronger than ever & we are full speed ahead.”

According to Saylor, the MSTR stock is up “123% through August 1st,” outperforming bitcoin itself, which is 94% up in the same time period. Not only that, but it also outperformed the S&P 500 and Nasdaq, which are only slightly up; and gold, silver, and bonds, which are down. Besides that, it dubled Google’s growth and outperformed Apple in the same period. And Amazon, Meta, and Netflix are down.

MicroStrategy is a hybrid company, Saylor continues. Their business intelligence and enterprise software business has stable revenue and good cash flow. Bitcoin is just their treasury reserve asset, and considering the inflation rates of almost every country on Earth, it’s a really good one. According to Saylor the asset is responsible for getting the company through this “difficult financial period” in which “most currencies are crashing and most assets are struggling.”

About The Supposed Loses

Obviously, all of the TV hosts Saylor visited asked him about the $1B that MicroStrategy supposedly lost. MicroStrategy has not sold one BTC so far, how can that be qualified as a loss? According to the CEO, it was just a “non-GAAP impairment charge for the quarter” and all of the stockholders knew it was coming. In the Bloomberg interview, Saylor described it as “a non-cash indefinite intangible loss.”

According to Investopedia, “a non-cash charge is a write-down or accounting expense that does not involve a cash payment. They can represent meaningful changes to a company’s financial standing, weighing on earnings without affecting short-term capital in any way.” And those “reduce earnings but not cash flows.”

In any case, Saylor said “volatility is vitality” and MicroStrategy embraces the volatility.

Saylor On The Company’s Bitcoin Strategy

The name recognition that bitcoin brought to MicroStrategy can’t be bought. They “can’t really ignore us,” Saylor said. Bitcoin has been a “benefit on marketing and sales” and a “net positive” for the company. In fact, he qualifies it as “a screaming homerun for the shareholders.”

Finally, the host asks him what everyone was thinking. Does he stepping down as CEO mean that MicroStrategy might be selling some of their BTC? Saylor’s answer, “Our officers and our directors are unanimously committed to the bitcoin strategy.”

By our count, Saylor was a guest on three mayor TV shows today alone. In all of them, he told a similar story. However, he dropped new nuggets of information here and there. Sharing the video of his FOX visit, Saylor wrote, “Today Charles Payne and I shared a laugh as we discussed the benefits of a Bitcoin Strategy, the outperformance of $MSTR vs other stocks & asset classes, and my decision to take on the Executive Chairman role at MicroStrategy.”

The new information is that MicroStrategy adopted bitcoin only 2 years ago. At the time, the company was valued at $666 million. Since then, they’ve “added 5 billion to that number.” That means that it has grown 730% in 24 months. Remember, this is the value of the company as a whole. The 123% growth we quoted before refers to the MSTR stock.

In the Bloomberg interview, they asked Saylor about Tesla selling 75% of their bitcoin. He answered it was a sad day for Tesla, but immediately took it back and said it’s not his place to comment on other people’s business. However, Saylor said, “acquiring and holding high-quality property forever is a good investment strategy. And bitcoin in my opinion is the highest-quality property in the world.”