VET rallies by 12% after VeChain’s partnership with OrionOne 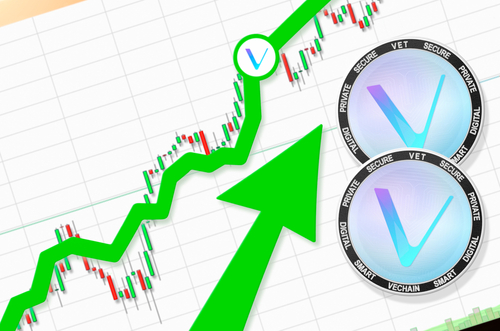 The cryptocurrency market has bounced back excellently after underperforming on Wednesday.

The cryptocurrency market has bounced back from Wednesday’s slump, with virtually all the coins in the top 100 trading in the green zone.

The market has added more than 7% to its value in the last 24 hours, with the total market cap now above $1.1 trillion at press time.

Bitcoin has surpassed the $24k level again after rallying by 7.33% in the last 24 hours. The leading cryptocurrency could be eyeing the $25k psychological level over the next few hours.

VET, the native token of the VeChain blockchain, is one of the best performers amongst the top 50 cryptocurrencies by market cap. VET is up by more than 12% in the last 24 hours and currently trades at $0.032 per coin.

VET’s rally comes after the VeChain Foundation announced that it has integrated with US-based logistics software company, OrionOne.

The VET/USD 4-hour chart has turned bullish as VeChain has performed excellently over the last 24 hours. The technical indicators show that VET could rally higher soon.

The MACD line is now within the positive zone, thanks to the latest rally. Thus, indicating that bulls are currently in charge of the VET market.

The 14-day relative strength index of 67 shows that VET could move into the overbought region if the rally is sustained.

If the bulls remain in charge, VET could surge past the first major resistance level at $0.0378 before the end of the day. However, it would need the support of the broader market before it can make a move towards the $0.045 resistance level in the short term.